I was one of the play testers for Mint Delivery so my opinion is not without bias, but it also means I have some added perspective and a head start on some of the deeper strategies. That is what I would like to share with you today. Strap in; there is no time to waste. 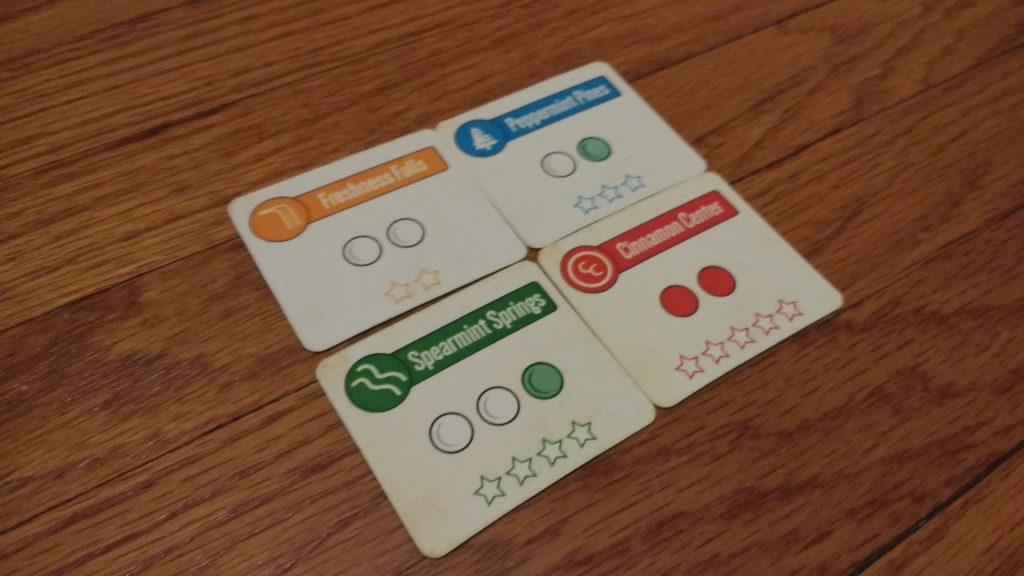 Orders may not literally be the name of the game but they are what you will be delivering. Each order has three attributes you should be aware of. There is the town destination. You might have to haul your mints to Freshness Falls, Peppermint Pines, Spearmint Springs, or even Cinnamon Center. Also listed are the required mints. These towns may need you to deliver classic(white), sugar free(green), or even cinnamon(red) mints. The last thing to note is the star value of the order which is how much it is worth if you complete delivery of the order, undelivered orders are worth nothing. You can only have up to three undelivered orders at a time. 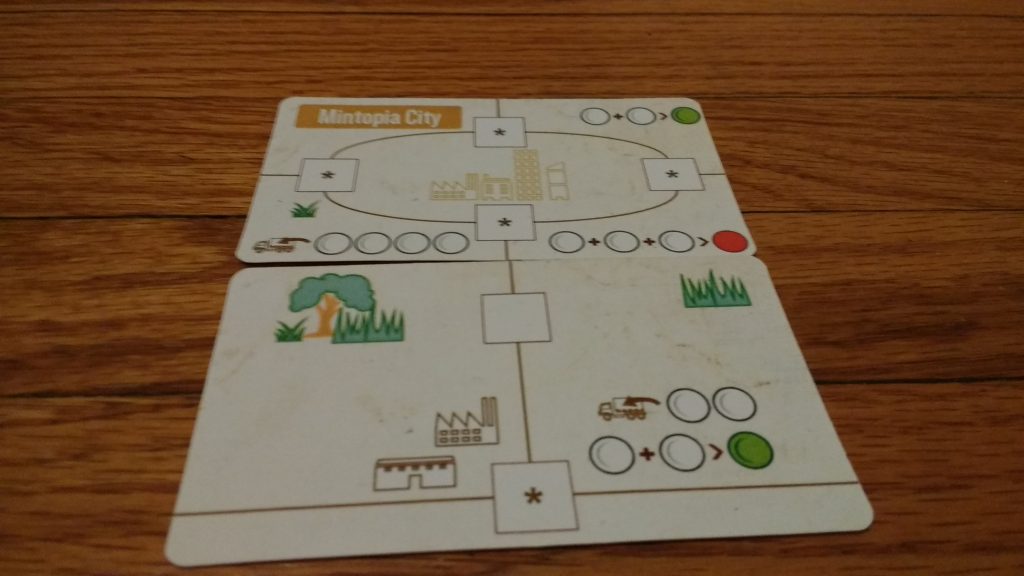 Each turn you can perform two actions. These include loading mints, upgrading mints, moving, picking up new orders, or unlocking special abilities. You have to be in the right space to take an action.

In Mintopia City mints are plentiful so you can fill 4 mints for a single action. It is also the only place with the technology to make the coveted cinnamon mints. The warehouses between each of the towns will do in a pinch and save you having to make the trip back into the city. At warehouses you can fill 2 mints or upgrade to green mints. Towns are where you can pick up new orders to deliver. One thing to keep in mind is delivering order is considered a free action and does not use one of your actions for the turn. Special abilities can be unlocked from anywhere as an action but you must have the required number of completed orders. 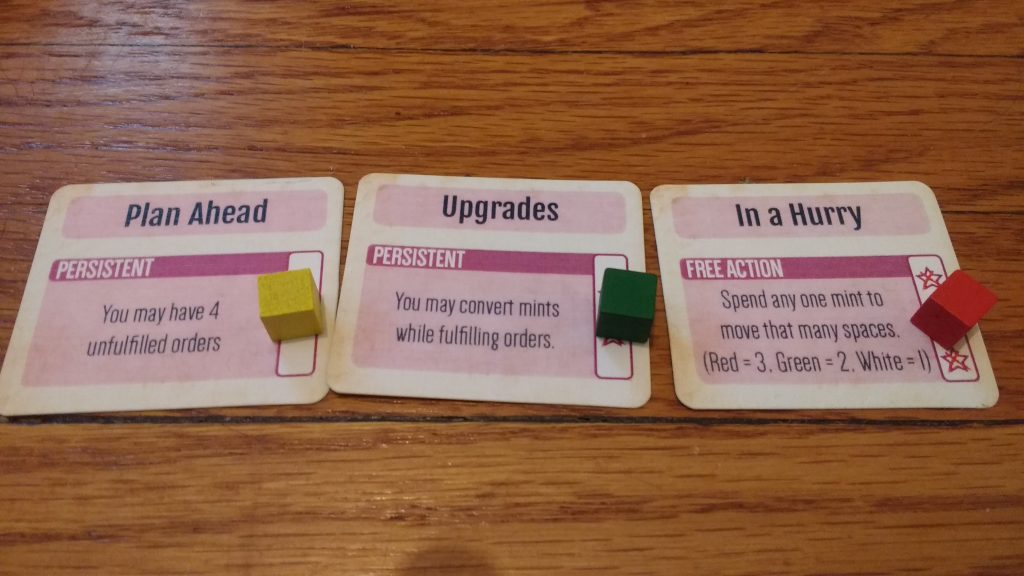 Special abilities are entirely optional and it may be a good idea to forgo them on your first game. That being said they add a lot nice variance to how games play out once you have a handle on them.

More development time went into the special ability system than any of the other system in the game and I think that effort really paid off. The final system for unlocking these upgrades does a good job of satisfying competing concerns without becoming fiddly to execute. Every game is played with exactly 3 special abilities that cost 1, 2, or 3 completed orders to unlock in addition to the spent action. Spent orders are still scored at the end of the game but any given completed order can only be used towards a single available ability. To unlock In a Hurry I would have to spend an action on my turn set aside 3 of my completed orders and place my red cube on top of the stack of 3. This not only marks those orders as spent on an upgrade but also serves as a marker showing I have unlocked In a Hurry. 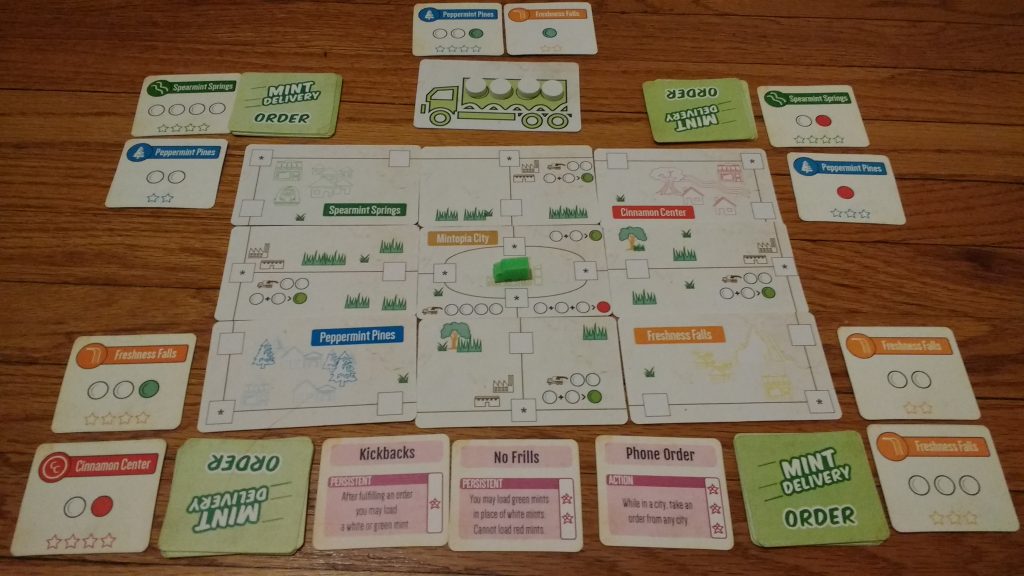 At the start of the game each player is given 3 orders and can choose to keep up to 6 stars worth of orders. Once all the orders are chosen reshuffle all the other orders and make 4 stacks of 7 orders for each of the towns. The top 2 orders from each stack are revealed. If you are playing with special abilities 3 are revealed. Everyone starts in Mintopia City with a full truck of 4 white mints. Someone takes the starting player token and the game begins.

Gameplay is fast so you won’t have to wait long before it is your turn again. Every time an order is picked up in one of the towns a white mint is placed on the remaining order as added incentive and a new order is revealed from the deck. Gameplay continues until all 4 decks are depleted or 2 of the towns have no face up orders in addition to a depleted deck. All players always get equal turns so no matter who ends the game play continues until the last player takes the final turn.

In 2 player games you follow all rules as normal but in addition whenever you deliver an order you can remove any face up order in a town from the game. This speeds up gameplay but it also adds some vicious take that game play. If that is not to your liking you might consider playing with smaller decks in each town but I have never had more fun playing Mint Delivery than some of the back and forth 2 player games. The added planning to account for your opponent trying to nuke what you want out from under you really takes the game to a whole new level.

It may seem obvious but strong play in Mint Delivery comes from action efficiency. If it takes your opponent 6 actions to score 4 stars and you can do it in 5 actions you will start to pull ahead. There are two ways to increase your efficiency. The first is what I refer to as the home town advantage. These are orders that can be delivered in the same town they are picked up in. If you look back to the setup picture this would include the 2 orders in Freshness Falls and 1 of the orders in Spearmint Springs. While these types of orders have a big upside if you have to leave to get the mint to deliver them the advantage is mostly squandered.

The second path to efficient play is the smart selection of orders. Because orders all take an action to pick up smaller orders will tend to be less efficient than larger orders. On the flip side because red mints can only be acquired in the city the larger orders including a red take a long time to complete. Roughly speaking that means the 3 and 4 stars orders with minimal upgraded mints are the best order to complete. Also remember uncompleted orders are worth nothing so it is often to your advantage to cause the end game on your own terms or be prepared when one of your opponents does. Games are usually pretty tight so missing out on delivering that last 3 star order can be the difference between winning and losing.

Its graphical design is admittedly low fidelity but several people may overlook the advantages of that approach. Because of this lower fidelity the look and feel of the game is generated and iterated upon earlier in development. Because the game designer is also doing the graphical design there is no extra translation of intent. All these factors come together in a slick execution that looks as good as it plays and is well worth your time. Stay safe on the roads out there.