Vacationing in the Archipelago of Dominated Strategies: A Preview of Island of Gems

Island of Gems is live on Kickstarter now so check it out!

Abstract game have seen something of a resurgence as of late and I think Island of Gems holds up well against many lofty entrants into the field. 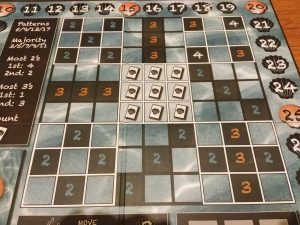 At its core it is a min max problem where your moves are dictated by your opponents but there are enough paths to prosperity that you are never hemmed in. It’s placement rules are based loosely on that of ultimate tic tac toe, so the system is easy to grok but the implications of each move are far reaching and fun to read out.

The board has 9 sections, laid out 3 by 3, which each has 9 squares, laid out 3 by 3. Not quite a fractal but pleasing nonetheless. 8 of the 9 sections have black squares that are worth more than the standard 1 point per square and also form a pattern. If you can complete this pattern by claiming all of the black squares in a section you will score bonus points during end game scoring.

These patterns are wickedly difficult to achieve but they are a valuable source of forcing moves to bully your opponents with. There is also additional scoring for claiming the most 2s and 3s on the board making the 1 point, non black spaces, worse past the initial point deficit. The center section has no pattern and is not worth any points on its own but allows for access to the card market which grant additional end game scoring options. These cards usually range from a wash against a 3 point move to very strong. 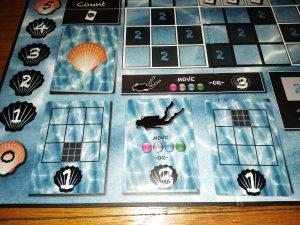 Scuba is a fundamentally difficult undertaking and these cards are no different. When taking a scuba diver you can score 3 point immediately or move 1 of your gems 1 space orthogonally. This is potentially powerful but extremely difficult to set up so people will often be opting for the 3 points.

We have actually covered almost all of the end game except the easiest category to achieve and that is majority. Majority simply entails having more gems in a section than any other player. In the case of a tie neither player has the majority in the section. Since majority is so easy to achieve somewhere, the problem becomes how do you win more sections than any other player. As far as I can tell that comes down to forcing your opponent to win their majorities by wide margins while snatching yours by a single gem.

In this way you will be able to win the majority in more sections and out score your opponent in majority.

Long winded though this explanation may be the gameplay is lightning fast. Players may suffer from some AP given the gravity of each move but their turn simply consists of laying a single gem.

The emergent gameplay is a deep and vast ocean so make sure you can swim. Good for a quick paddle to loosen up or a trying dive to test your limits. Island of Gems is a great game and a game I will revisit often. 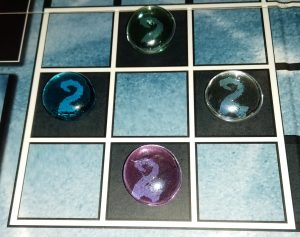