Through the grape vine as it were, I heard the Across The Board guys were holding a Five24 Labs demo day. That in and of itself is pretty cool but what really got me excited is they were hosting a Mint Works Tournament. Being that Mint Works has been a perennial lunch time favorite of mine since its release I was pretty stoked to test my mettle in a tournament setting. 12 competitors came to play and it was decided that there would be 5 rounds of Swiss play then a cut to a final 4 person table.

Swiss rounds were played at 3 tables of 4 so it was important to optimize play around a max player count. Starting player is especially important in 4 player games. You don’t need to go first necessarily, but going last often leads to a weak turn. In light of this early red plans are important so you can avoid fighting over producer actions and instead focus on maintaining starting player and get early picks at the available plans. Early picks do not help if you are short on mint so it is often correct to keep a healthy mint supply and never spend your last mint. Spending your last mint is especially bad early in a round because you lock yourself out of further actions for the round. Do whatever you can to avoid going to zero.

After 5 rounds of Swiss I was able to rack up 3 firsts and 2 second places placing me as the first seed going into the final table. Looking back on those Swiss rounds one thing that helped me was having a lot of 7 star 3 plan neighborhoods. There are only so many 3 plan combinations that make 7 stars, and that number is cut even further if you want a red plan included. Making 7 stars from 3 plans forces shorter games and limits the upside to some of the power cards such as Obelisk or Corporate HQ. Obviously setting up such a point efficient neighborhood is not always possible but be one the lookout and you may be surprised at how consistently you can set it up.

The final table was played on a set of giant Mint Works over 3 games with last place being eliminated each game. Here I stuck to my game plan of focusing on keeping mints in reserve and buying star rich plans. I did not win either the 4 or 3 player games but did well enough not to be eliminated. In the final game I won the finger touch in Chawzi and got to start. With a board of Corporate HQ, Assembler, and Lotto, I decided to go for infinity mint with Corporate HQ, whereas my opponent Tim went for the remaining Assembler. I then lucked into a Co-Op next to assemble a nearly unbeatable economy. All in all the event was great fun and despite how much Mint Works I have played, I still learned a thing or two. These types of events are what make the board game community so vibrant and welcoming, and I am sincerely grateful I could join in on the fun. 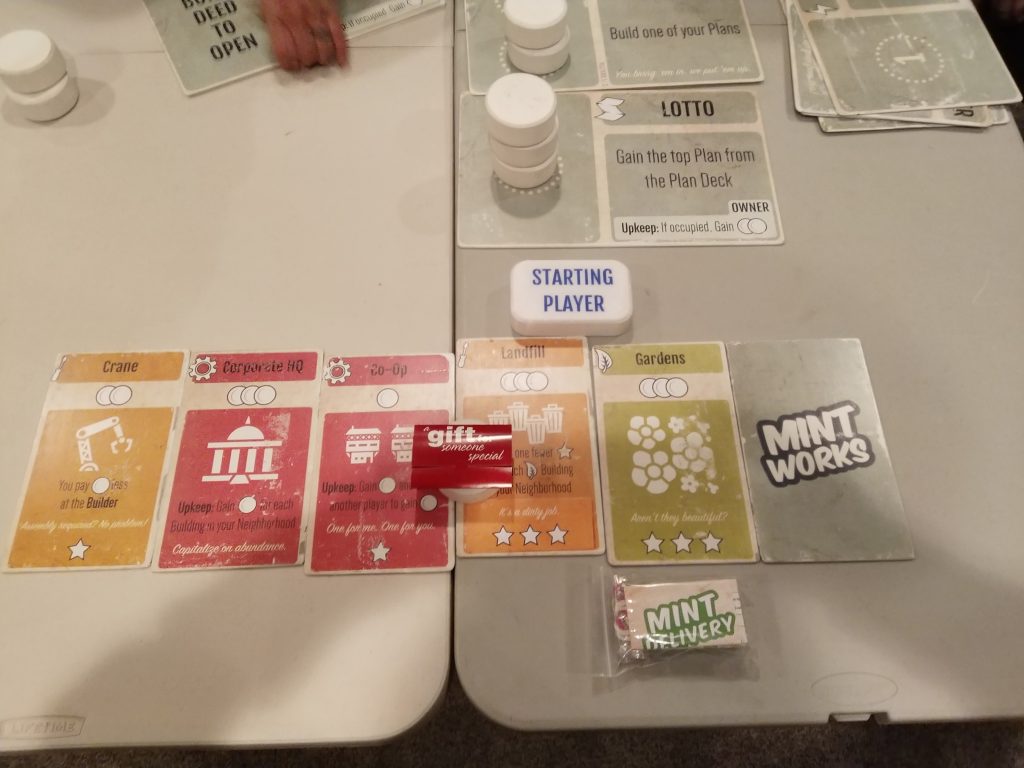