The Definitive Travel Guide to Bitter Taint: A Review of Charterstone

Spoiler Warning: To review any legacy game without any spoils is a futile effort. As a compromise my review will have some mechanical spoilers but minimal storyline spoilers. 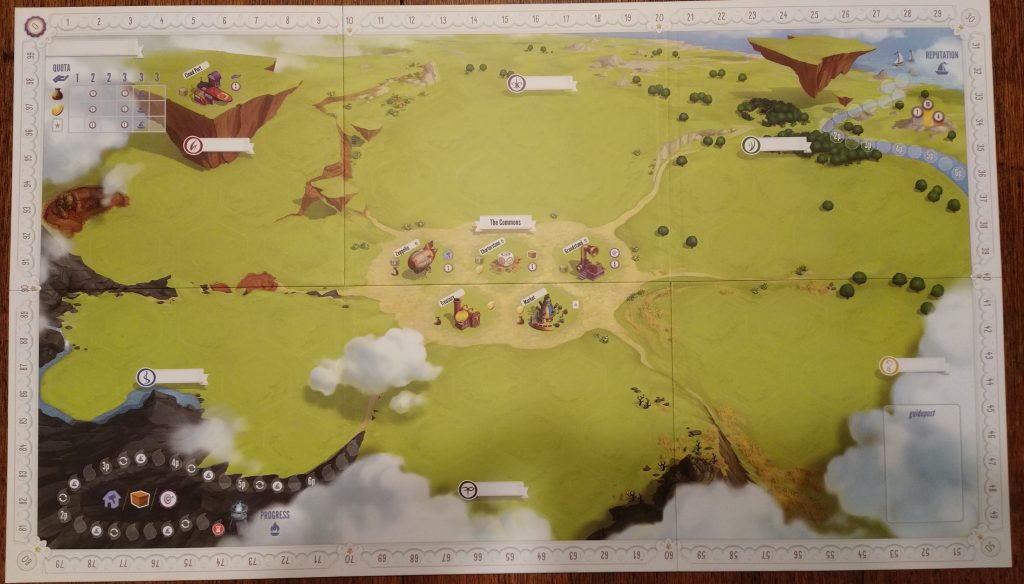 Charterstone is legacy worker placement game played over the course of 12 games. The overall winner is determined largely through the collection of glory throughout these 12 games. Glory is every full 10 points you have scored at the end of each game; e.g. scoring 56 points in a game would net you 5 glory.

The starting board is such that a minimalist spartan might find it empty. This could be a problem in some worker placement games where this lack of spaces would block any of your useful moves. Not so in Charterstone as pieces are never blocking. If someone else’s worker is on the space you want you simply take the space and return their worker to them; you can even boot your own worker. This simple rule pulls a lot of weight. You can always use the space you want, but it also incentivizes you the play moves that are in high demand to get your workers back. 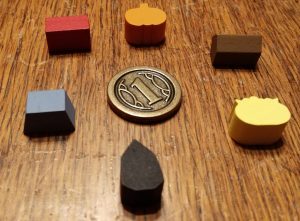 Normally once both of your workers are on the board, you will need to spend your next turn returning all of your workers from the board. By getting other players to return your workers for you, your off turns can be fewer and farther apart. This is a key tension in the game and one not seen in many worker placement games despite its simplicity.

There are 6 resources in the game bricks from the clay pit, pumpkins from the garden, wood from the forest, wheat from the field, taint from the mine, and cave pieces from the cave. In addition to these basic resources there are coins and cards of various types that can be purchased from the market.

Charterstone features several trackers for all sorts of things but luckily all of it is pretty straightforward. Around the outside of the board you will track your VPs and it is important you don’t knock these pieces or forget to score points. Scoring is done throughout the game and it will usually be impossible to back calculate what your score should be at any given time. 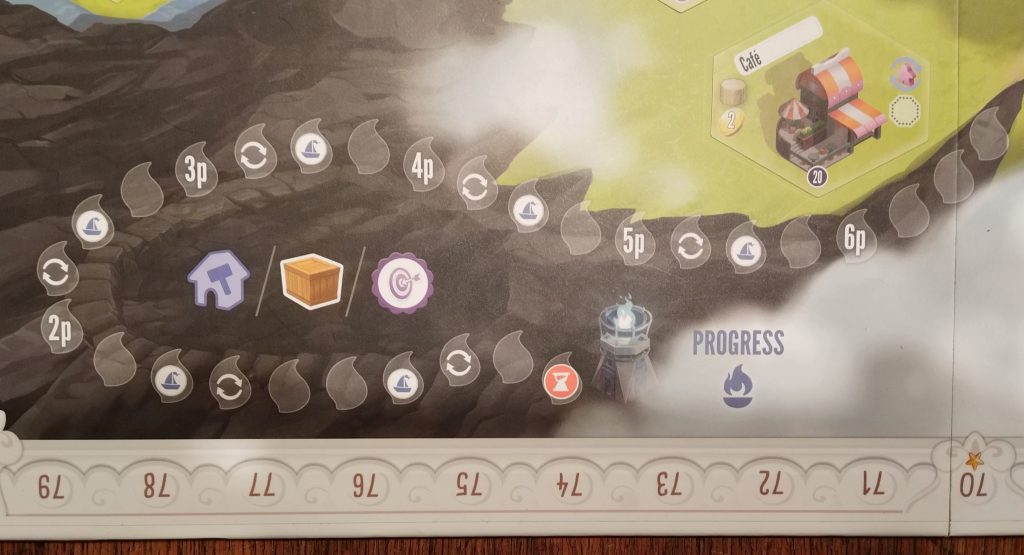 In the bottom left hand corner is the progress tracker which tracks how close the game is to ending. Each time a player builds, opens a crate, or grandstands you advance the tracker one space forward.  When the tracker hits the red hourglass at the end of the track that signals the end of the game. Play continues from there until it is the last players turn ensuring all players had equal turns in the game.

Also there are some bonuses for advancing the time track to specific spaces along the track. Whenever the tracker lands on a space with the swirling arrows everyone may collect any income they are owed. Also if you specifically advance the tracker on to one of the sailboat spaces you may place one of your influence on the reputation track. 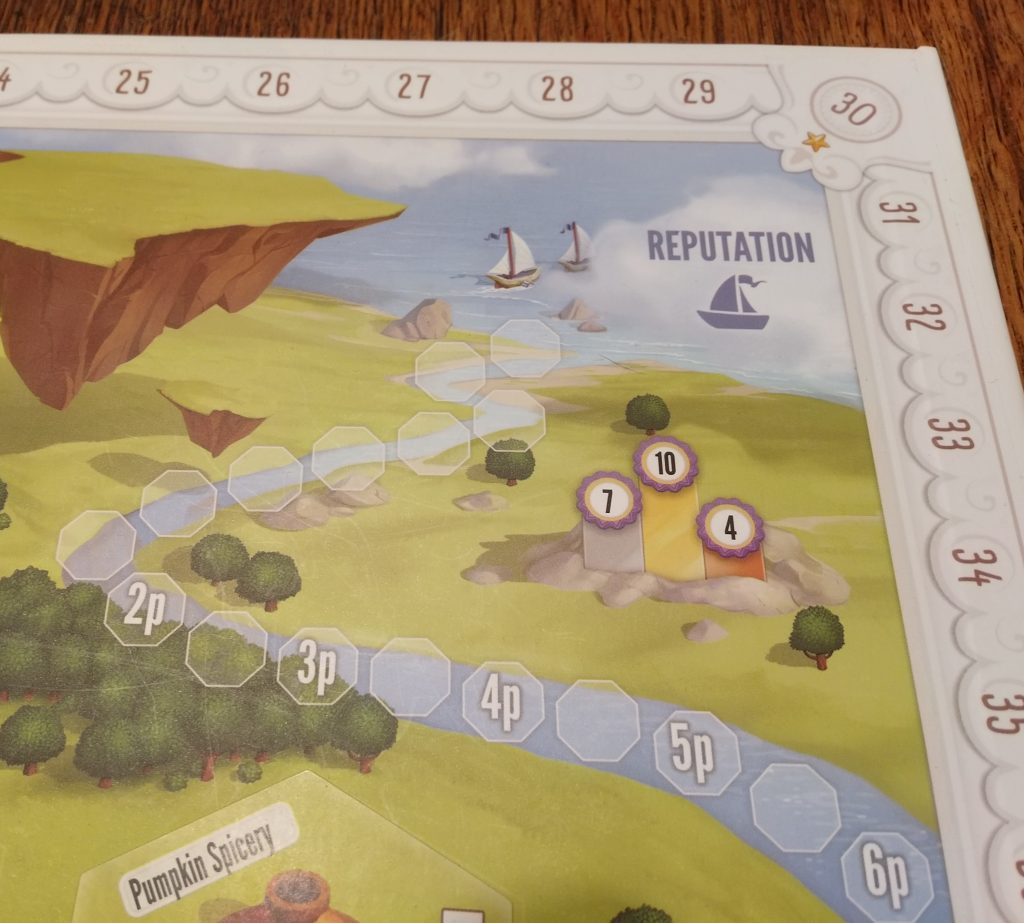 Reputation is a track that can be filled with player’s influence which allows for some additional end game scoring. First get 10 VPs, second 7, and third 4. At a max player count of 6 it might seem difficult to snag one of those 3 top spots but the game uses friendly ties which makes it much easier to at least score something. What that means is if 2 player both have 4 influence on the track not only do both of them score 10 VPs at the end of the game the player with 3 influence on the track will still score 7 VPs. Because of this friendly scoring I think trying to do well on the reputation track is often a mistake.

Most scoring methods cost influence in some fashion so spending a lot of it to win the reputation track will cut you off from spending it somewhere else. In addition because of how tieing works 1 influence will usually be enough to get 4 VPs which further limits the value of hunting for that top spot. An easy way to put the influence cost into perspective is by looking at the quota board at the cloud port. 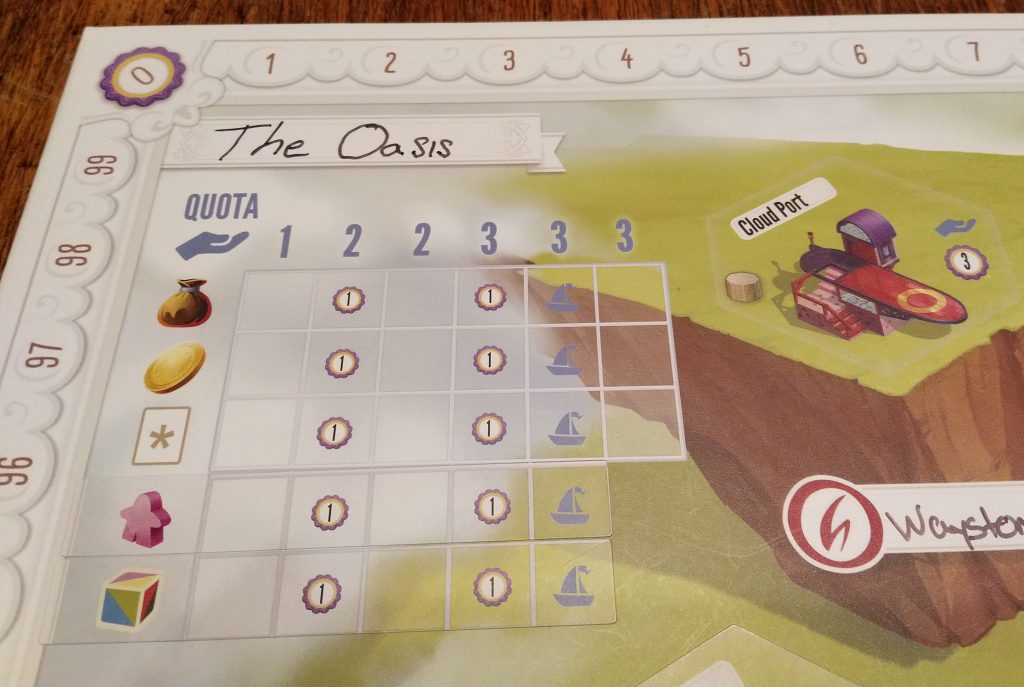 The quota board has spots on it that player can fill with their influence by taking the cloud port action and spending the correct quantity of right resource. From this baseline we should be looking to score about 3 VP per influence. Now it is true that building and opening crates are at a worse conversion but they in general increase your board presence in some way. That is is it for what will be tracked on the board but another whole component of the game are the slew of cards you can acquire representing all sorts of things from assistants to treasure, even buildings. 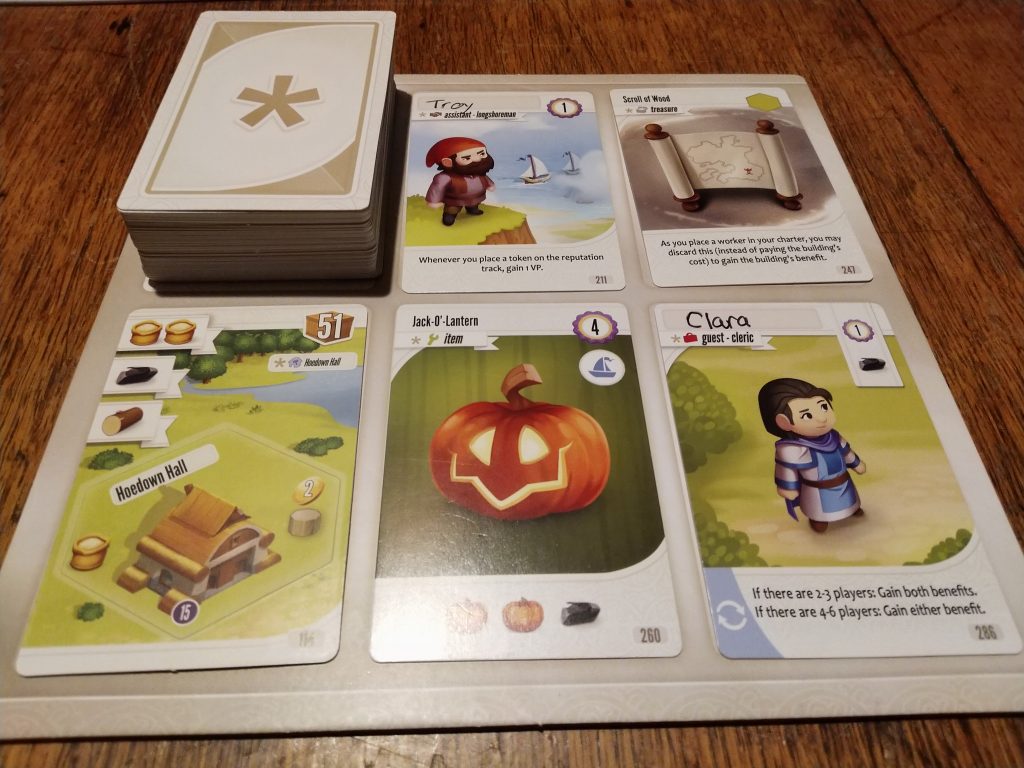 The card market is the most variable aspect in the game with card powers ranging from extra actions for free to maybe getting an extra coin if you use the right building in the right charter. Because market clearing is not a standard action the strong cards tend to get bought up until the market is uniformly weak. This dynamic is unfortunate but can be mitigated by one of the buildings that can be built over the course of the campaign that allows for a market clear. The market could keep moving if people valued cards differently based on their board state but, save a few assistants, the cards power levels don’t vary much person to person.

From the market I value guests very highly because they provide a consistent income. Most of the treasures are pretty good since their upsides are strong and there is no cost past getting the card in the first place. Items are ok because they are one of the few ways to score VPs without spending influence. Assistants are good if you can build some kind of combo around them but if that is not the case I would avoid them.

O Minion, Where Art Thou? 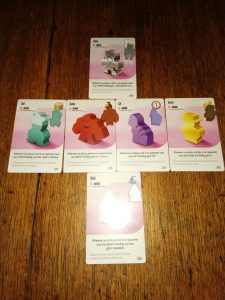 At some point along the way your group will start unlocking minions that can be acquired and act as additional worker meeples. Minions are workers but they are a little special in how they function. They have an upside that whenever you place them or someone uses that same spot you get some kind of bonus based on the type of worker. In the case of someone else using your minion’s location that does not bump you minion. Their downside is they can only be placed in your own charter and can never be placed somewhere that is already occupied.

Generally people don’t sweat bumping other players workers but minions are a whole new level. Players go to great lengths to avoid letting opponents double dip on their minions so get your minions down fast on high value spots in your charter. At worst you will stop your opponents from using your best spaces and just maybe you will get some free loot. Most of the minions are of roughly equal power level but one shines brighter than the rest and one is so bad it can be hard to see. Robots get you free card buys from the market and are clearly the best minion. You should get at least one robot and than bring it with for every future game. Ghosts let you place reputation and if you were following along earlier that is not a great place to be. The other four are close in power level allowing you to return 1 spent influence to your pool, take any one resource, take a coin, or gain 1 VP.

Charterstone is expansive and there is a great deal I did not cover. That being said I don’t think anyone will have much trouble playing the game. Stonemaier really hit the mark in terms of accessibility. The story is terse and unobtrusive but the payoff at the end was pretty satisfying. I thought they got a lot of mileage out of their storytelling. A legacy eurogame game is somewhat of a rarity but Charterstone makes it work. I would fully recommend it to any regular gaming group thinking of giving it a try. 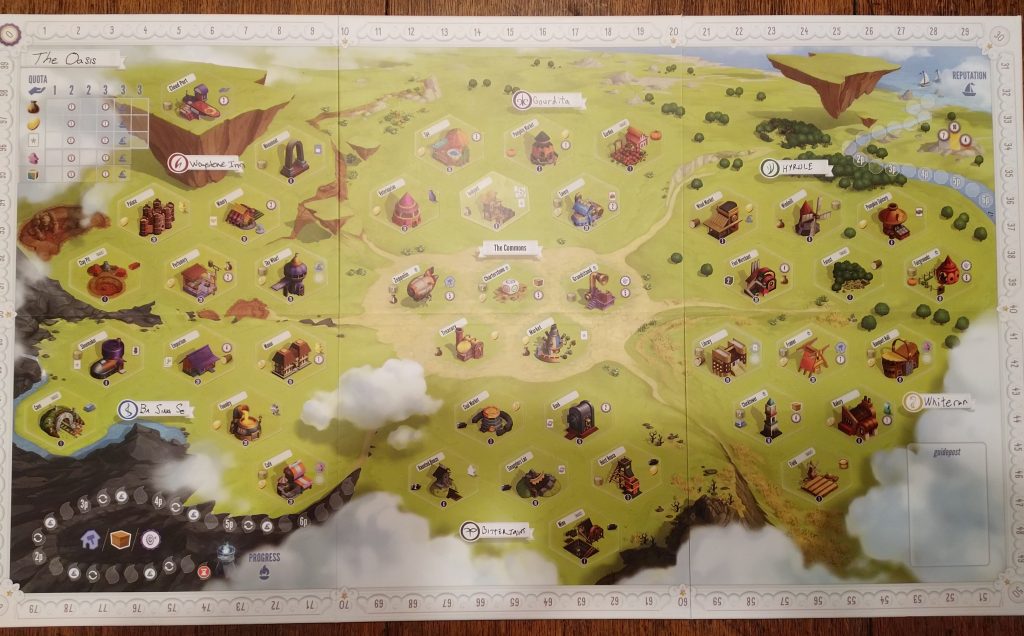 P.S. Why was my charter proudly named Bitter Taint? All I will say is that charters are named at the end of the first game.